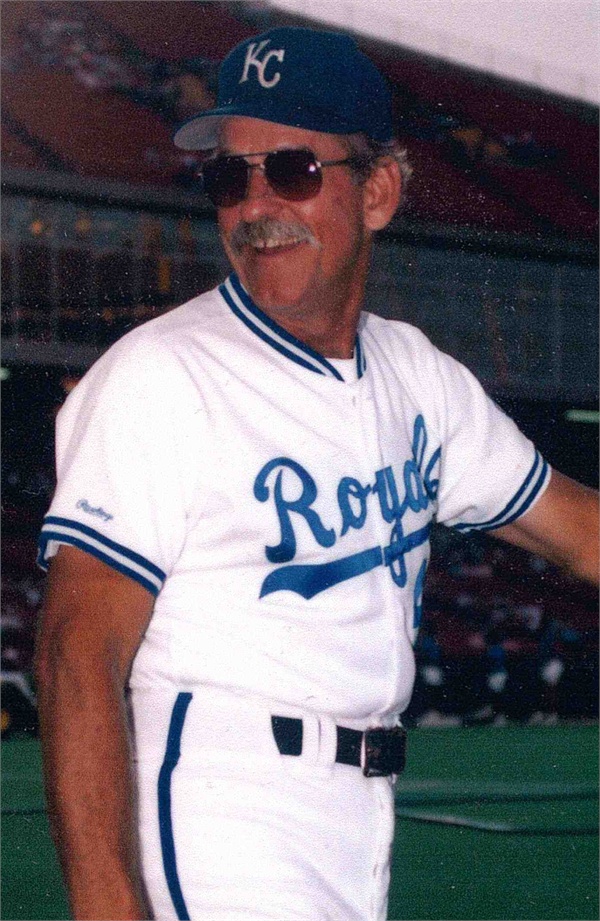 Do you remember your childhood answer when grownups asked What do you want to be when you grow up? Did you ever answer, I want to be a baseball player? Even if that wasn't your answer, almost everyone had a brother or friend who did voice that goal. That was Glenn Ezell's boyhood dream and that became his lifetime career path. Glenn passion for the American Pastime became the path of his life and on October 22, 2012, it led to his induction into the Pima County Sports Hall of Fame.

Reflecting on over four decades of baseball, most of it on the professional level, Glenn credits his early coaches for putting him on a path that led to a career that others dream about. Growing up in Tucson, Arizona Glenn played a lot of baseball. Because he showed interest, ability and a willingness to learn, he was invited to play on several teams besides his school, Amphitheater High. He even played summers for the coach of his high schools arch rival, Jim Wing. Coach Wing made a large impact on Glenns life and career as an example of unselfishness and fairness. In fact, Glenn credits coach Wing and all of his youth baseball coaches with giving him a chance, and introducing him to concepts that would become foundational to his career. Concepts such as team first, being unselfish, playing 27 outs, running 90 feet and never quitting.

Glenn ended his freshman year of his high school career on a sad note. At 5am on the morning his team was playing in the championship game, his father suddenly died. Glenn remembers that in the years leading up to that sad morning, he would always look for his dads 1949 Plymouth in the parking lot. Seeing the Plymouth meant that his dad had been able to find the ball field where Glenns team was playing that day and was somewhere in the stands watching. However, the day his father died, Glenn was not allowed to play in the championship game because he missed school. He is convinced that his father would have wanted him to play, but the school principal disagreed.

After high school, Glenn received a scholarship from College Hall of Fame coach, Frank Sancet to play catcher for the University of Arizona. This was especially significant because hometown Tucson boys rarely were offered scholarships in those days. For Glenn, it was his only avenue to college. During his career, coach Sancets teams had a record of 831 wins vs. 275 losses (and 10 ties). Unfortunately, Glenn became very ill and was diagnosed with mononucleosis in his first semester at Arizona and was given an incomplete in several classes. Because the scholarship was contingent on maintaining a certain GPA, he lost the scholarship and had to leave school.

After his semester at Arizona, he took a job at Tucson Gas & Electric, but played baseball in the evenings for Jack Ellis Sporting Goods, a semi-pro team. That year, playing in the league championship game, Glenn recalls being a runner on first base when the pitcher threw to first to try and pick him off. Glenn recalls sliding hard to get back to base. The first baseman groused at him, take it easy. That game and that slide would later have a major impact on Glenns life. The opposing coach in that game was Jack Watson who also happened to coach for Arizona Western JuCo in Yuma, Arizona. Noticing Glenns effort, he later recruited Glenn to attend Arizona Western and play ball two years for Arizona Western. That first baseman was Dee Fondy. Dee had spent twelve years in the major leagues playing for the Cubs, Pirates and Reds. Later Dee Fondy took a job as a scout with the New York Mets and signed Glenn to his first major league contract.

After signing, Glenn reported to the Mets class A ball club, the Greenville Mets, where his coach was Clyde McCullough, a veteran major league catcher. While serving as a manager in the Mets farm system, McCullough managed Tom Seaver, Tug McGraw, Jerry Koosman and Glenns roommate, Nolan Ryan. Before he could move to the majors, Glenn was traded to the Minnesota Twins and reported to their AAA ball club in Portland Beavers. That year, he made the major league roster as their catcher, however Minnesota wanted to give their current catcher one last chance to retain his job before officially calling Glenn up to take his place on the major league roster. That player made the most of the opportunity and Glenn never made it to the majors.

After his playing career was over, Glenn enrolled in San Diego State to finish his college degree and focus on life outside of baseball. He had always been grateful that his wife Roberta was willing and able to maintain a strong and steady home front. During this time, Lauren their daughter was born.

While in San Diego, Glenn became involved, along with other major league players in coaching a winter holiday league for boys from the area. It was there, while attending college that he met Bob Skinner, a long time player, coach and manager in the major leagues. Skins had a long career with the Pirates where he played a significant role in winning a World Series. Later, he played for a St. Louis team that also won a World Series. Glenn became friends with Skins and asked if he would recommend him to his bosses with Pittsburg. Skins was at first reluctant. However, as he got to know Glenn better, he saw the qualities that are so valuable in major league baseball: leadership, an ability to communicate, unselfishness, genuine interest in the growth of young men and ability to tell the truth, even when it hurt. A few months after meeting Glenn, Skins did recommend him for a position managing a major league farm team in Niagara Falls, NY for the summer. This allowed Glenn to finish his degree in the winter and manage in the summer. His path to the major leagues had taken a new turn; rather than playing, Glenn was now investing in the lives of other young men so that they could play.

Glenns career in the major leagues lasted a long time. In fact, recently when Glenn reminded Skins about his initial recommendation, Skins replied you must have been pretty good, you lasted forty-four years. Indeed Glenn's career covered a lot of ground. He was with Texas, Kansas City, Detroit and Tampa Bay as a coach, manager and executive in both the majors and in several farm systems. In Kansas City he had the opportunity to move from bullpen coach all the way up to the dugout as second in command to manager Hal MacRae. Kansas City had a talented club and Glenn has always appreciated the opportunity to be a part of the action at that level.

The pinnacle of Glenns coaching career came in 2003 when Detroit promoted him from Field Coordinator of Instruction for the Tigers organization to Director of Player Development where he was responsible for the development of the players in all of Detroit's farm system. One of the first things Glenn looked for was players who would buy in to the ideas he had learned on the ballfields of his young adult years that had been so foundational in his career. The lessons Glenn learned on the dusty fields of southern Arizona paid off enormously for the Detroit Tigers. In 2006, after a twenty-two year drought, they returned to the World Series and played St. Louis. That team was filled with young talent that had come through the Tigers farm clubs and understood and embraced the one uniform concept that Glenn had always played and taught. Eleven of the twenty-five players on the World Series roster had left their footprint in the Tigers farm clubs, and five had been originally signed by the Tigers and never played for another team, coming bottom to top through the Tigers farm system.

This year, Glenn was excited to be recognized in his home town and inducted into the Pima County Sports Hall of Fame on October 22, 2012. As he reflects on the wonderful career he has enjoyed, his appreciation is greater than ever for the men who gave their time and efforts to him and to countless other young men. He is grateful for the foundations that he was able to build a career around: team first, dont quit, give to others. For Glenn, these lessons are what it has all been about.